Leak released an astonishing number of valve preamps over quite a short period of about a decade, often having four models in production at the same time (Point One/Varislope and mono/stereo). See the Services tab for a chronology.

They suffer from enormous output impedance due to not having a final buffer stage, which severely limits the length of the umbilical interconnect cable; and from the tape-out being taken off after the tone controls and filters, and the balance control where present, which makes it basically useless. The design before the high-impedance filter stage and balance control is elegant, and economical in using the same gain stage for everything from 5mV phono to 2V tuners: however this inevitably compromises the distortion performance of the phono input.

Not all of the Leak preamps interconnect with all the valve power amplifiers, due to differing umbilical socket connections. We can advise on or modify the umbilical cable, which Leak must have provided in different versions, mutually incompatible. See the following table. 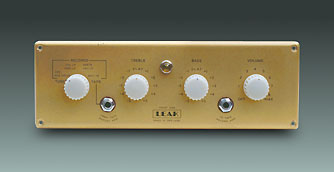